How Many Calories in Greek Yogurt

Greek yogurt is the newest fad across the world. Most people are switching out their regular yogurt for this creamy, delicious goodness that makes for an ideal base for your granola, smoothies, acai bowls and so much more. Greek yogurt hasn’t just taken over the diets of millions of people in the country, it has also taken over their social media habits, becoming one of the components of the most “Instagrammable” food that can be seen in people’s photo-based social media profiles. While you may find yourself running out to the store to buy another tub of Greek yogurt, it is important to understand what exactly this popular food is and what goes into making it. You don’t necessarily have to buy it in a store; you can also make your own Greek yogurt at home by using some high-quality yogurt starter and a Greek yogurt maker that can easily be bought off the internet. However, before you do that, it is important to understand its nutritional value and how many calories are in Greek yogurt.

What Is Greek Yogurt?

To be able to understand what Greek yogurt is, it is essential to understand its composition. For this, you need to understand what whey is. If you have seen the process through which milk curdles and changes its composition, you would have noticed the water-looking substance that it gives off. This liquid – which contains a good amount of lactose – is known as whey, a natural sugar that is a part of the milk’s original composition. Greek yogurt is one of the most popular dairy products today – especially among millennials – which is the end result of the whey being removed from the yogurt after a continuous straining process. 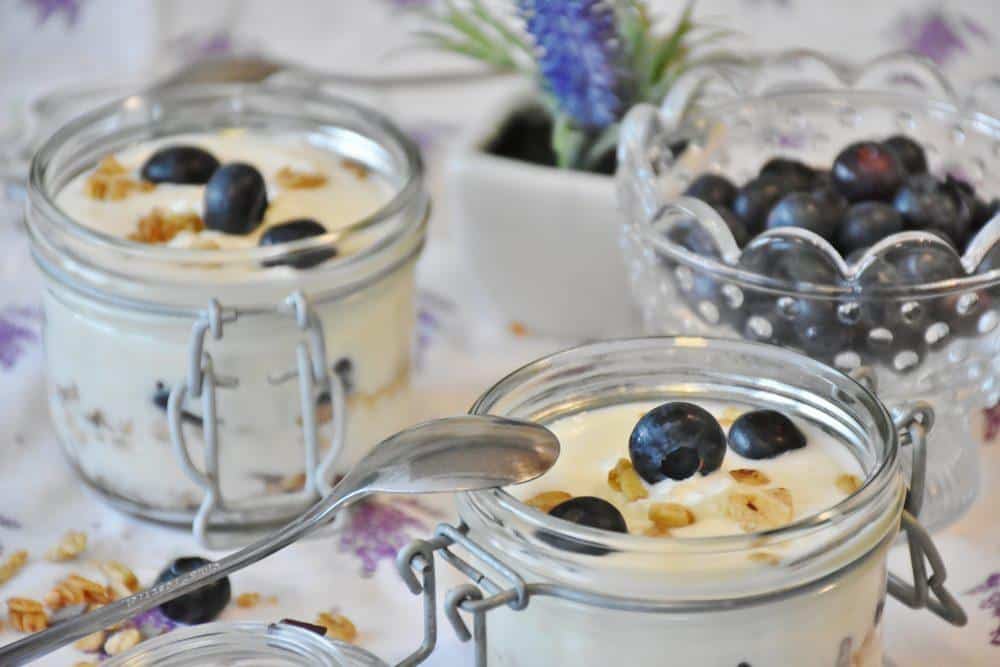 The final result that you get is a much denser form of yogurt, which is not just high on nutritional value in the form of proteins and carbohydrates, but also in terms of caloric content and the degree of fullness that it provides you. Traditional Greek yogurt is usually high in fats, but there are many non-fat variants or low-fat Greek yogurt variants that are available in the aisles of your local supermarket. This thick bowl of deliciousness is very creamy and goes well with a number of different combinations – berries, granola, and so much more!

How Is It Different from Regular Yogurt?

It may be difficult for people to distinguish between regular yogurt and Greek yogurt, but the differences are pretty stark when it comes to their composition and nutritional values. When you strain the regular yogurt some several times, it can turn into Greek yogurt as more and more of the whey is separated from it. This causes it to develop a thicker consistency than regular yogurt. There are some main points of difference between Greek yogurt and regular yogurt. First and foremost, if you are opting for strained Greek yogurt, it is going to be lower in terms of sugar content. The key here is the removal of the whey, which causes the yogurt to adopt a slightly tart taste. Keep in mind that there are some brands of yogurt that are advertised as “Greek-style” because of the addition of thickening agents, but these differ from actual Greek yogurt considerably. Even the low-fat versions of Greek yogurt may differ when it comes to nutritional content.

Finally, in addition to the increased amount of protein, Greek yogurt also has more fat than regular yogurt. The main cause for this is the high concentration of nutrients. However, if you want Greek yogurt with less fat, there are many low-fat or fat-free versions available in the market.

How Many Calories Does Greek Yogurt Have?

Now we come to a very pertinent question – how many calories in Greek yogurt? The answer to this isn’t very straightforward as different manufacturers can use different ingredients, which can drive up or drive down how many calories are in Greek yogurt. However, if you were to make a generalization, 100 grams of plain, non-fat Greek yogurt will have approximately 60 calories, according to the information posted by the U.S. Department of Agriculture. Similarly, a 170-gram serving of Greek yogurt could have approximately 100 calories. In comparison, regular yogurt – albeit low fat – will probably have more calories than the low-fat Greek yogurt. For example, a 100 gram serving of low fat yogurt has about 63 calories, while the 170 gram serving of regular yogurt has closer to 110 calories. How many calories are in Greek yogurt also depends on whether or not it is flavored. If you prefer flavored yogurt, you need to understand that you will be consuming more calories because of the added sugar and flavoring.

Now that you understand not just how many calories are in Greek yogurt but also its overall nutritional content when compared to regular yogurt, you will find yourself better equipped to make decisions about what is better for your health. Keep in mind that fats aren’t always the enemy and if you truly want to lead a healthy lifestyle, you will have to find the right balance between counting calories and eating healthy, nutritious food.